The Criminal Death Center, or in short the CDC, has unanimously decided to mass murder millions of beautiful, precious, divine and unique children.

They voted to include the health wrecking, immunity destroying, heart disease inflicting, brain damaging, nervous system impairing, DNA altering, experimental cocktail of undisclosed toxins into the already hellish overdose of injections that must be given to all children in America. To put it in official terms:

The monsters at the Criminal Death Center of course totally ignore the heart wrenching reality that millions worldwide have been killed, hundreds of millions are damaged for life, countless are blind, tens of thousands are paralyzed, innumerable are suffering from immobilizing heart disease, thousands are deaf, and the immune system of countless people has been devastated by these injections.

The terror unleashed upon humanity by these toxic injections is unspeakable.

The Criminal Death Center (CDC) naturally also disregards the horrible findings of some of the world’s most respected scientists, like Dr. Robert Young, who revealed that many vaccine vials contain self assembling, self replicating nanorobots, that can be activated by 5G and EMF.

What is this nanotechnology doing inside so called “vaccines”? What kind of satanic agenda are these psychopaths executing here?

Children are at zero risk for C0VID-19, and every single person at the Criminal Death Center knows this. The vast majority of all C0VID deaths were the elderly of high age, who had several comorbidities already, and would have died within a few months anyway. Virtually no children died of C0VID.

But millions of little kids are already suffering from heart disease, destroyed immune systems, nervous damage, paralysis, and many more health disasters, after being injected. Now the Criminal Death Center wants to increase this number dramatically by adding these destructive injections to the childhood “crippling your life from the very start” immunizations. 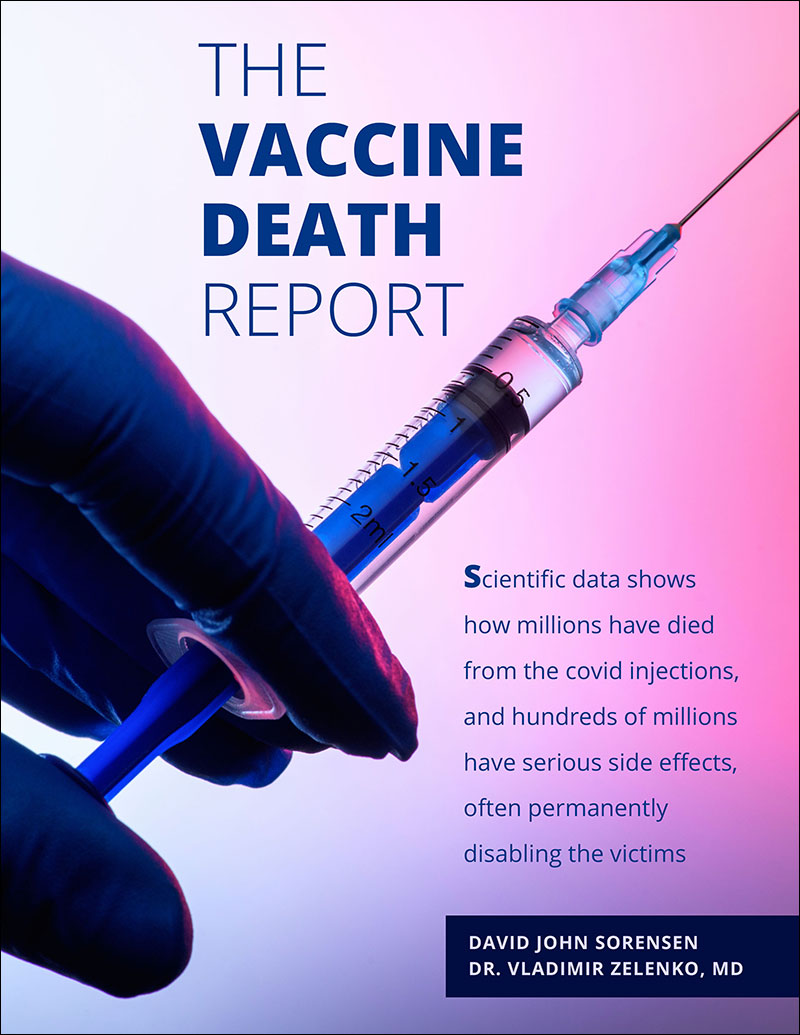 This decision cries out to the heavens, for severe judgment to come upon all who are consciously guilty of this mass slaughter of the countless precious babies that will be killed, or handicapped for life, by this “poison death shot” as the hero of humanity and nominee for the Nobel Peace Price Dr. Zelenko called them. Together with this world renowned physician, who successfully treated several presidents and ministers for C0VID, I made the Vaccine Death Report, that shows abundant and heartbreaking evidence for all the above.

This in depth evidence report exploded virally worldwide last year, but it is high time to spread it once again, as today far more people are aware of the nightmares these injections are causing.

I have been gathering hundreds of articles, studies, emails, videos and datasheets to create a devastating update to this report in the future. Pray for me please so I can make this highly critical update. But the first edition is already shocking enough, and deserves all our efforts to spread it once again, now that the Criminal Death Center has unleashed hell on all newborn children in the United States of America.

I cry out to all who read this, to please - even if this is the first time in your life - take this report and forward it to all you know, near and far.

I have updated the initial numbers from VAERS to make that data up to date. All the information of this first edition is still entirely accurate today. There is no report like this, as it is unsurpassed in its vast depth of information about how these injections are crippling humanity.

The injections change the human DNA

Besides the Vaccine Death Report you can also find an overview of astonishing vaccine documentaries that document in detail why these injections are so extremely destructive to humans. Mark Zuckerberg, the CEO from Facebook, is recorded on video, saying to his staff that these injections indeed alter the DNA of humanity, and they do NOT know what the long term effects of this will be. You can hear Zuckerberg say it, in this video:

Our groundbreaking documentary with the world’s most interviewed physician, Dr. Carrie Madej, confirms how these injections are meant to alter the human genome, and start the process of creating a new breed of “humans”, that will behave, think, and feel differently from the humans that were made by the Creator.

This is confirmed by countless other experts like the insider from the British financial elites, and former officer from the British Intelligence Agency, Alex Thomson. He testified before a Grand Jury with 11 lawyers and a judge that the injections serve to create a new breed of humans that will become the perfect slaves for the elites.

This has been predicted by many investigative journalists in the past, who have been trying to warn humanity for decades.

The world renowned biophysicist Andreas Kalcker, who works with tens of thousands of physicians worldwide, and who saved millions of lives in South America with his treatment for C0VID, has revealed that the injections contain one of the most dangerous substances in existence: graphene oxide. This substance destroys the body from the inside, and it travels to all parts of the body, even the brain. It cuts through our cells like tiny razor blades! A naturopathic doctor Andreas Noack, who also revealed this, was brutally murdered by the police (source).

Graphene oxide is also the best conductor for 5G signals, turning the human body effectively into a receptor and transmitter of 5G signals. That is what is being injected in millions of innocent, vulnerable, defenseless children… Health wrecking, DNA altering substances, full of nanotechnology and graphene oxide,

People of the world, I cry out to you: please stand up.
We need to rise up. All of us.

Our website contains a vast wealth of resources that you can use to warn humanity. We have to do something. If this happens in America, it will be done in many other nations as well.

The CDC really is the Criminal Death Center.

Top level experts from the United Nations, the World Health Organization, military, government, the CDC and Pfizer have revealed that the three letter agencies - like the CDC, FDA, WHO - are controlled by the criminal financial elites, who use them to destroy humanity, for their own enrichment. They are the exact opposite of what they publicly claim to be.

Wake up the world, I beg you. If we don’t stop these satanic criminals, the terror and horror unleashed on millions upon millions of families and babies will be unspeakable.

May the full judgement of the Most High be released upon ALL who are even partially responsible for this cruel torture of the most vulnerable and defenseless of this world.

May the wrath of the Creator fall down as never before upon these satanic criminals, who care more about one zero more on their bank account, than about the precious lives of countless beautiful children.

May heaven explode with rage against these tyrants, who trample on the heads of the innocent ones, while they themselves are full of the worst guilt imaginable.

Download the Vaccine Death Report to see scientific data that shows how millions have died from the covid injections and hundreds of millions have serious side effects, often permanently disabling the victims.